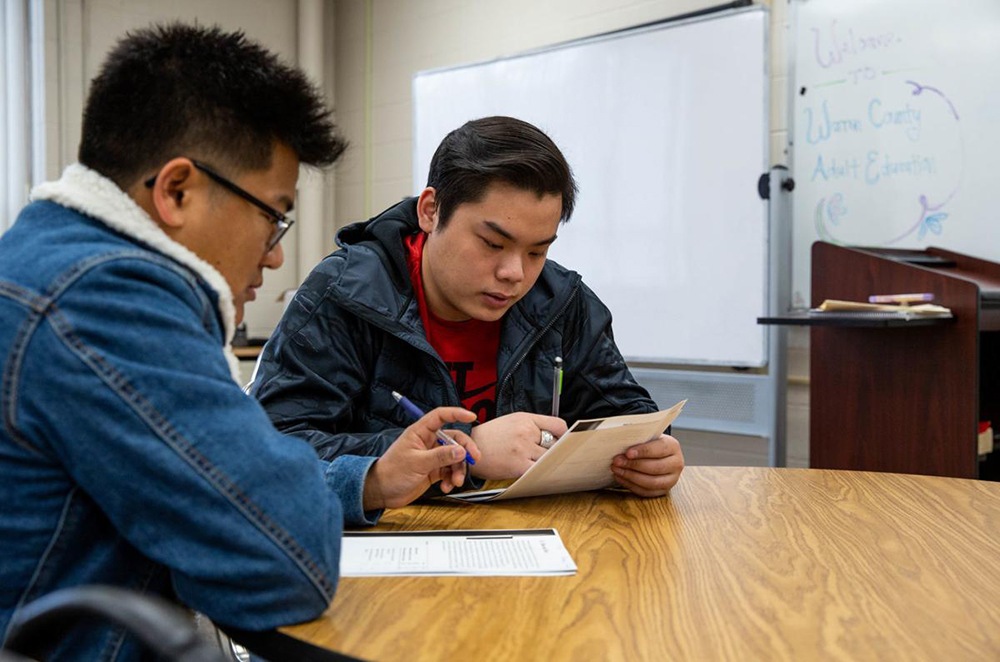 After Gov. Andy Beshear’s administration revealed Tuesday that the state will waive exam fees for Kentuckians seeking their General Education Diploma, or GED, the phones in the adult education office at Southcentral Kentucky Community and Technical College have been buzzing.

“They’re very excited,” said Ginger Sparks, a student worker at SKYCTC pursuing a business degree who herself earned a GED through the Skills U program hosted at the college.

Before the fees for first-time test takers were waived, GED students were required to shell out $120 to take the multi-section exam.

But with more than 335,000 Kentuckians without a GED or high school diploma, the Education and Workforce Development Cabinet (the state agency that oversees Kentucky Skills U) allocated $600,000 in state funds to clear the way for students. More information is available at kyskillsu.gov or by texting MYGED to 74700 to connect with a local Skills U office.

“People that don’t have a lot of money are calling and wanting to know if they can go ahead and begin testing ... ,” Sparks said. “It’s exciting because now we’re getting more people wanting to get their GED.”

A news release announcing the change said more than half of Kentuckians who do not have a GED or high school diploma are absent from the state’s workforce. The release touted the move as a way to boost employment for Kentuckians held back because of a lack of education attainment.

Brian Becker oversees the Skills U program at SKYCTC as its director of adult education.

While it’s always been free for students 18 and older to come and receive academic assistance from Skills U, which facilitates GED attainment in all 120 Kentucky counties, Becker said the change gives anyone who hasn’t already attempted the exam their first attempt for free.

What’s more, the change could clear the way for Warren County GED students to take their following attempts for free. Becker added that his office will use local funds to cover students’ second, third and fourth attempts, should they fail to pass the exam on their first crack at it.

Since June, about 250 adult students enrolled in the program at SKYCTC, Becker said. A big percentage of those students are foreign-born, having also receiving English education services.

Becker said the cost of the exam has been a barrier for students, along with managing the logistics of arranging child care and finding transportation to access the test center.

“We just encourage everybody, even if it’s been years, come back and have another crack at it,” Becker said. “If they have doubts about this being accessible to them, I hope that this will eliminate some doubt.”

Sparks, a single mother of four children, remembers the fear she felt the first time she walked into the adult education office at SKYCTC.

“It’s not easy visiting something that you didn’t complete that you should have, that lots of other people do,” she said.

Now as a SKYCTC student working in the same office, Sparks acts as an encouraging voice putting trepidations to rest.

“I was so scared when I first walked in here. It wasn’t easy, so I can completely relate with other people that come in here,” she said.

Sparks confronted that fear after feeling like she was at the end of her rope. Working long hours in factories or at a local thrift store wasn’t getting her where she wanted to be.

“I decided I wanted to show my children the best way, and that was to get an education.”

The journey wasn’t easy. Sparks said she struggled the most with math, and would often be locked in feelings of frustration during her battles to master the content. She credits her instructors at Skills U – particularly Michelle Hunt – for supporting her every step of the way.

Now, studying business at SKYCTC and looking forward to her first full-time semester there this month, Sparks feels like that future she’s dreamed of isn’t so remote. She envisions starting a business and possibly passing it on to her children.

“Even if they don’t want to run the business, at least I did it. I completed one of my dreams. I showed them it’s possible to complete theirs,” Sparks said.